"Cambodia weather" was last updated on March 24, 2012
All information below is subject to change

The climate in Cambodia can be divided into three seasons;

The dry season is from November to February, hot season from March to May and wet season from June to October.

It's really hot and humid in the hot season. In the rainy season, heavy rain tends to last a couple of hours, but it's also observed that rain can last all day or none at all.

Since I've been to Cambodia twice at two different seasons (dry and hot season), I'll tell you about the weather in various parts of Cambodia.

Absolute minimum temperature (not average): 9° (May)

Like most cities in Southeast Asia, the climate and weather in Phnom Penh is hot. The temperatures are comfortable from December to February, then they start to rise at the end of February/beginning of March.

I visited Phnom Penh in December and every day was sunny, warm but still cool. I easily felt the difference between being there in December and in April. Phnom Penh during April is hot and humid, and it can be unpleasant. The heavy traffic pollution doesn't make it any better.

The Phnom Penh weather is usually not affected by the rainy season like many other parts of Cambodia. In other words, it receives little rainfall. And when it rains, most of the rain comes in the afternoon.

For some reason, Siem Reap feels a lot hotter than Phnom Penh. I visited Siem Reap in December and April. In December, days were sunny and warm, and nights were cooler. April was freaking hot, I thought I was going to drown in my sweat. We always took a shower before we went out, but we dried up in less than an hour. The weather in April is scorching hot and uncomfortable at times.

If you're visiting the Angkor Temples, and want to watch the sunrise, the early mornings will be cool even though it's the dry or hot season. So remember to bring a thin sweater for the trip.

I visited Battambang during the dry season in December. Still hot and sunny during the day, but nights are a little cooler. It's a dusty town so it feels hotter than it really is. 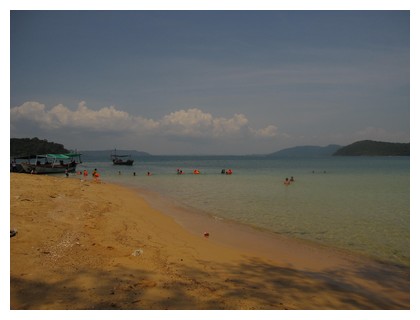 Temperatures in Sihanoukville during the dry and hot seasons are hot, but still comfortable because of the sea breeze.

Having beaches in Cambodia make the trip bearable during the hottest of the hot season! ;-) At nights, the temperatures dropped but it was still warm and humid. 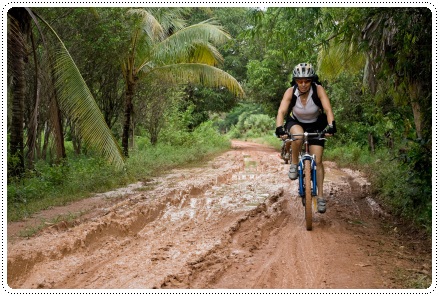 Muddy roads in Cambodia during the rainy season

The temperatures in Ratanakiri and Modulkiri provinces are lower than other parts of Cambodia because of its geographic location. Situated on a plateau, this is the green part of Cambodia.

Traveling by land in the northeast of Cambodia (Ratanakiri and Modulkiri provinces) during the wet season is slowed down by heavy rain and flooded roads.

Visiting waterfalls and volcanic crater (Yak Lom lake) are the major attractions around Ban Lung. Waterfalls will be average during the dry and hot season, but great during the wet season.

Like Ban Lung, the temperatures during the day are warm in the dry and hot seasons, but temperatures drop dramatically at night. Don't forget to bring a light sweater or a fleece sweater. Visiting Sen Monorom or Ban Lung is definitely a comfortable break from the tropical heat and humidity in nortwest and south Cambodia.

In the wet season, you get cooling rain showers many days.

Return to top of Cambodia weather

Cambodia is hot all year round, with dry season being the coolest period. In my opinion, the best time to travel is the dry season from November to February, especially if you're visiting northwest and south Cambodia.

To get best of northeast Cambodia with waterfall visits and trekking, you should visit in the wet season, at the end of May/June. Floods are the worst from August to October. Floods are caused by Mekong River and Tonle Sap lake filling up quickly and flooding houses and roads.

It starts to dry up in October and there will be little water in the streets. But of course, this varies from year to year.

For more information on water situation (Mekong River), visit this site (opens in a new tab/window)

Looking for a guesthouse or hotel in Cambodia?

Return to top of Cambodia Weather