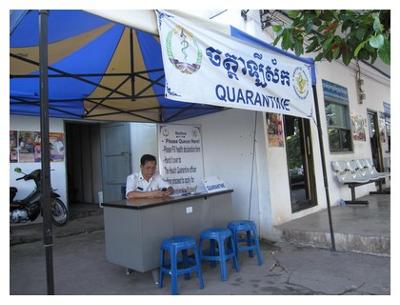 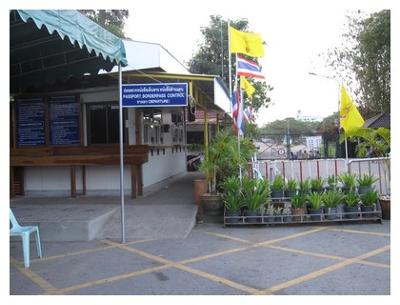 Thai side of border crossing 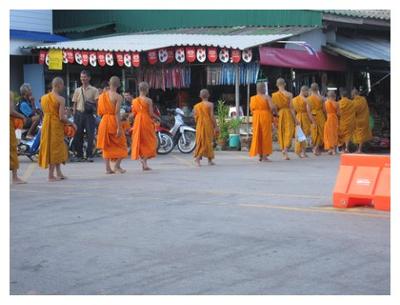 Captured the novice procession while waiting for the border to open

In early April 2010, we decided to cross the border to Cambodia through the border crossing of Hat Lek and Koh Kong. What a big mistake!

I've been slightly scammed once at a border crossing (from south Laos to northeast Cambodia), but it was lousy 1 USD. That day in April 2010, I didn't expect to lose in total: 320 THB during 50 minutes. All of this happened on the Cambodian side of the border.

I'm writing this down to remind myself of never getting scammed again and to give you the best insight of this particular Thai and Cambodian border crossing.

Cambodia was our main target during our 5-week travels. To save time we decided to take the night bus from Ekamai bus terminal in Bangkok to Trat.

The bus company we used was Cherdai Tour and the ticket cost us 249 B per person. The buses leave Ekamai at 10 pm and 11.30 pm (there are more buses to Trat than these, but this are the hours I noticed).

We arrived around between 4 and 5 am in Trat. Bummer, because the border was opening at 07.00 am. From Trat bus terminal to Hat Lek, we rode in a Songthaew (cost 150 B per person).

Arriving two hours before the border opened was just boring. Exhausted as we were, we found a bench and crashed there.

At 7.00 am sharp the border opened. The Thai side was quiet. On the other side of the gate, dozens of Cambodians were waiting to cross the border.

Taking our first steps on Cambodian soil, we were immediately followed by English-speaking Cambodians who wanted to offer all sorts of things. I was tired and almost delusional, so I stopped to listen to what they had to say.

This is how we got scammed and lost money:
One guy offered his help to get our Cambodian visas. We told him that we already had the visas. He didn't stop bugging us. This guy convinced us and took our passports so we could get the stamp.

Lesson nr.1: Stamp your visa by yourself.

Five to six people were surrounding us and I felt like a prey trapped in a circle of wolves.

I found a bench and wanted to sit down to think. They whole experience was overwhelming.

Guess what... they followed us.

The guy who took our passports led us to a "Quarantine" station where they checked if I had a fever. The bells started to ring, but in the end we had to pay 20 B per person so we could get a yellow "health declaration" with a stamp on.

Lesson nr. 2: Check WHO or that country's Foreign of Affairs before entering a new country and see if there are any particular health declarations you have to go through. If not, don't pay.

Another guy asked if we had bus tickets to Sihanoukville and offered them for 1200 B for two persons. First I said yes, without thinking at all. My boyfriend looked at me and gave me the "slow-down" look.

My boyfriend didn't want to buy these tickets, so he said no. The guy got irritated because I originally said "yes."

Lesson nr. 3: Think before you act/speak.

Well, we didn't buy the tickets. And we're glad that we didn't. Found out later that those tickets were cheaper in Koh Kong town (500 B per person).

The guy with our passports came back with stamps. He looked at us and said: "OK now, you give me 100 B for help." Oh my frigging G**, what a dumb ass I was for letting this guy taking our passports in the first place!

So after a lot of inner cursing and sighing, and trying to wiggle us out of it, we paid the passport guy 100 B.

We just wanted to get the hell our of there and decided to get a taxi. Now they were 7-8 people surrounding us and offering taxi to Koh Kong downtown (15 km from the border), and it felt suffocating. It almost felt like I wanted to cry -- I was exhausted.

My boyfriend likes his personal space and our patience had run out.

Finally, we decided to go with one guy who wanted 200 B for the ride. It was way too much but we were desperate. We just wanted to leave that place and never ever come back again! In addition to this we had to pay for crossing the bridge (44 B).

Lesson nr. 4: Take the boat instead (they seem more appealing and less hassle).

When we got on the Virak Buntham bus to Sihanoukville, we slept through the whole trip.

This was the most expensive border crossing in my life. Beware!

All information is subject to change

Join in and write your own page! It's easy to do. How? Simply click here to return to Visa .