Looking for white beaches
in Malaysia? Welcome to the Perhentians 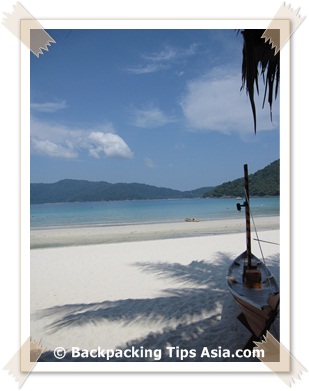 Where to eat & drink

Welcome to the Perhentians! You've just entered Malaysia's heaven! Some of the best tropical island destinations in Malay Peninsula.

The lovely islands are located on the Eastern coast of Malaysia, not far from the Thai border. The islands are Perhentian Kecil (small island) and Perhentian Besar (big island).

You will absolutely love it there! Because 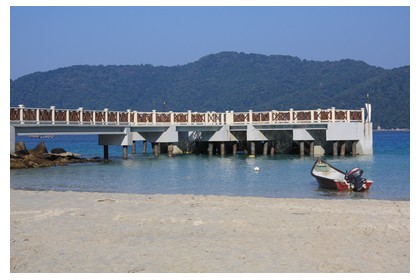 When we stayed there we saw bits and pieces of trash like paper, cans scattered around the bungalows and on the beach.

And it didn't seem like the locals cared much about it. It was just sad to see this. And sometimes pieces of garbage floated near the shoreline, especially in the afternoon.

Either way, I still recommend coming to the Perhentians, just because if their natural beauty. You have to search a long time before you encounter something that stunning

Thinking about volunteering in the Perhentian Islands?

- Then consider the Perhentian Turtle Conservation Project through Ecoteer. This is why:

How to get to the
Perhentian Islands 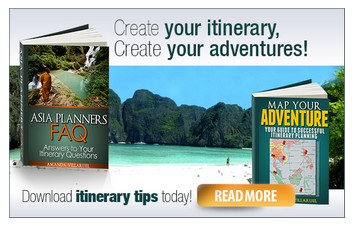 If you're coming from Kuala Lumpur, here's how:

Take a long-distance bus from the Putra Bus Station (north of KL) to Kuala Besut. As far as I know, you can choose between Mahligai Express (40 RM) and Mutiara Express.

Taking the Mahligai was effortless, fast and we had leg room. We were given a small bottle of water and some fruit. The bus stops once in the middle of the trip so the passengers can grab some food at a local restaurant, and you can also buy refreshments there.

But watch out for the wonderful toilets (I'm being ironic now...) Prepare yourself for a only a bucket of water and spiders possibly crawling up your crack.

The only thing the bus didn't have was a toilet on the bus... AND please sit where you're assigned to seat. We just sat down where we wanted.

Two hours later a pack of tourists boarded the bus. And they were like:"You're sitting on our seats...Can't you read?!"

We got really offended by their attitude and thought: "Of course we can read...!" But we didn't want to make a scene, smiled like an-alphabets (like they thought we were) and just moved.

But let me tell you how we experienced it... 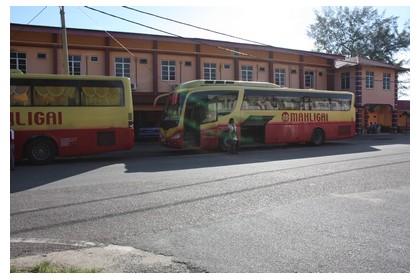 When we took the Mahligai Express, there were maximum 8-10 people on the bus, but yet the bus driver said that he would stop at Kuala Besut. We didn't even know if all of us were going to Kuala Besut...

So if you don't want to take a taxi from Jerteh and want to save time and money, I suggest that you ask the bus company if the bus drives by Kuala Besut. That is before you board the bus.

But on the other hand, there's really no hassle with taking a taxi from Jerteh...!

When you arrive in Kuala Besut -

- walk to the jetty (3 minutes) and buy a ticket. There's a building right next to the jetty with loads of tour companies. If you don't come to them, they will definitely come to you!

The company we used was actually MD Travelers Holiday. Before we came to Kuala Besut, I read in the Rough Guides (2008 version) that travelers had to be aware of this company because they happened to not pick up their customers when returning from the islands.

So I was kind of skeptic when our taxi driver drove us straight to MD Travelers (gee, I wonder why, maybe there was a commission involved). But we took the chance and bought tickets (70 RM for both ways if I remember correctly).

When we were ready to leave Perhentian Kecil, we called the MD Travelers the day before and asked them to pick us up at 8.00 am. And they did!

Take the evening bus from KL and arrive early in Kuala Besut (around 5 am). Then wait a couple of hours for the first boat to the Perhentians.

We took the bus from KL 09.30 and didn't catch the last boat at 05.30. We had to spend the night in Kuala Besut where there's basically nothing to do

But then again, we forgot to bring enough cash (no ATMs on Perhentians) so we got off at Jerteh to find an ATM. We don't know if we would have caught the last boat if we hadn't gotten off at Jerteh.

So I guess my worries weren't for nothing. But I don't want to generalize the whole situation. I mean, we did hear from the locals that the chances of getting picked up are higher in the morning, than in the afternoon... 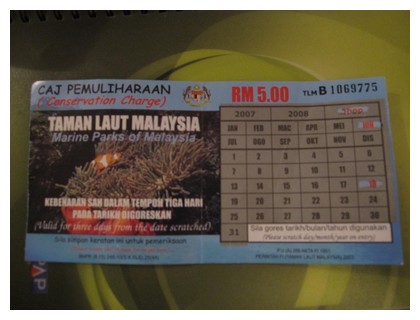 When you arrive at the jetty in Kuala Besut, you're expected to pay 5 RM extra in conservation charge. It's written on the ticket that the money goes to supporting the heritage programs.

One warning though: When the boat arrived near the shoreline of Long Beach, the boat driver told us that we had to take a taxi boat (2 RM) because he couldn't park the boat on the beach. 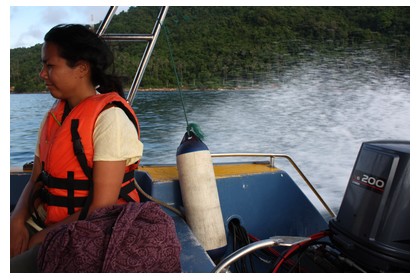 We immediately got skeptic to this I mean we were like 10 meters from the shoreline and he asked us to pay another 2 RM!

We sensed the scam alarm.

But it was either that or swim with our backpack to the beach. When we were dropped off at the beach, we saw several boats with travelers being dropped off right on the shoreline.

When you're ready to leave the islands, go to the bus station in Kuala Besut to buy a ticket.

For Mahligai Express, you have to purchase a ticket at the red ticket booth right outside Yaudin Guesthouse.

Leaving Perhentian Kecil - when can the boats pick you up?

The boats can pick you up at 8.00 am, noon and 4 pm. But to maximize your chances of getting picked up, I recommend that you take the 8 am boat!

If you want to use Muktiara, turn right after the jetty and you will find a small tour company which sells tickets to KL.

If you're heading for Kota Bharu, there are a lot of touts at the jetty who are willing to drive you there. But if you don't want to trust these guys, take a taxi near Yaudin Guesthouse.

Important places to know about:

Having trouble on where to travel in Malaysia? How to set up an itinerary?

You won't have a problem creating an itinerary after you've read this eBook. Learn how to create a good itinerary for Malaysia.

Don't know where to stay for the night on Perhentian Kecil/Perhentian Besar?

Here are reviews of Panorama Bungalows, Bubu's Resort and prices for other rooms on Perhentian Kecil & Perhentian Besar!

Here are some accommodation options for Perhentian Kecil (Long Beach)!

Where to eat & drink on Perhentian Kecil

You HAVE to try the Malaysian food on Perhentian Kecil!

It's cheap and some of it is absolutely delicious!

As usual, you'll get prices for meals & drinks (beverages & alcohol)

Welcome to Restaurants on Perhentian Kecil!

What to do on the Perhentians

Wondering about what kind of activities the Perhentians offer? (Few options though)

Among other things, we did the snorkeling trip around Perhentian Kecil and Perhentian Besar - and here's our review of it!

Return to top of Perhentians

What did you enjoy the most from the Perhentians? What is your best memory from these places? Any tips or advice?

What Other Visitors Have Said

Click below to see contributions from other visitors to this page. You can also comment the pages. 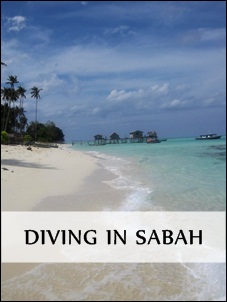 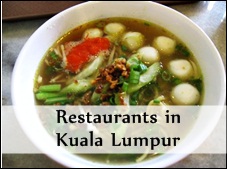 Learn Malaysian on your iPod