Hua Hin Thailand -- Should You Go or Not? 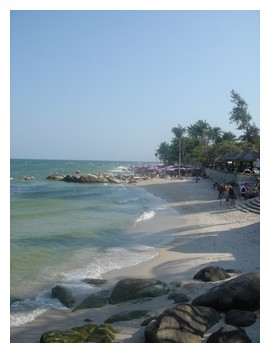 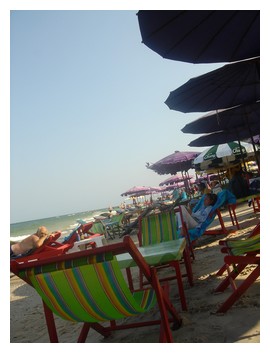 While I was exploring south Thailand in December and January 2007/2008, I stopped by Hua Hin. I was on my way from Khao Lak, stopping by Ranong to renew my Thai tourist visa. On the bus from Chumphon to Hua Hin, I got to know a nice Dutch couple who also had Hua Hin as their destination.

Since I knew I was arriving around midnight I called a guesthouse called Pattana guesthouse and booked a room. My experience with this guesthouse is outrageous.

I called them again to reconfirm my booking (about two hours before I arrived in Hua Hin). They picked up the phone and said that it was OK that I was arriving around midnight.

The Dutch people asked me if I had booked a room in Hua Hin, and since they hadn't, they followed me to Pattana guesthouse.

My first impression of Hua Hin:
After we were dropped by the bus by the main road at around midnight (on January 10, 2008) we were met by quiet streets. It felt like a ghost town.

We walked and walked and still no sign of living beings besides cockroaches getting busy on the streets, adding a creepy element to the silence.

Then we heard some music and followed the sound. Pattana guesthouse was supposed to lay near the beach. After getting lost in the alleys, we found it. But the gate was closed.

We rang the bell. No response. We rang the bell again. Still no response. After 10 minutes, this guy comes out all groggy. I told him I had booked a room and called earlier to reconfirm. He looked at us and just said: "No, no, not now" in a rejecting way.

I tried to tell him that I had booked a room. But he just turned away and disappeared into the building.

Irritated as I was, I swore to myself that I would never come here again. I was tired and had been traveling for 16 hours. I just wanted to put my backpack down for a while and rest. When I book a room, I expect that a guesthouse do their part of their deal.

Well, we had no other choices but to wander around in the darkness and among the cockroaches to find another accommodation. The Dutch people found "21 guesthouse." It was located in a very dark alley that I would never walk in if I was alone.

The family running this guesthouse was friendly and accommodated us. Think I paid 300 baht for a double room with air-con and attached bathroom. The room was OK but had thin walls, and the air-con was so noisy that I couldn't sleep the first night.

To ease our irritation, the Dutch people suggested that we should grab some beers. Finding a place to drink alcohol near the beach wasn't a problem. Just follow the loud drunken noise.

The next day, I decided to explore Hua Hin and see it in daylight. I just walked around, all the way to the main road and then to the beach.

Before heading for the beach, I stopped by Fish and Chips restaurant who was owned by a single mom with the greatest tattoos I've ever seen (don't know if this restaurant still exists). I grabbed some Western lunch and then I was ready for some swimming!

There was just too many people on the beach. You can clearly see that elderly tourists and travelers are roaming this strip of sand. I had brought my bikini and towel, but after seeing Hua Hin's beach I just walked away.

During the evening, I searched for some food stalls and actually tried a delicious soup with prawns (15 B). Walking down the streets where all the restaurants and pubs are located gave me the goose bumps.

I sensed the "Thai-ladies-giving-older-Western-men-company" alarm, and the most shocking part about it was the fact that it was so out in the open. I remember this feeling like it was yesterday!

The next morning, I took the bus to Cha-am.

Is Hua Hin worth it?
I would never return to Hua Hin. Period. If you want a backpacker place, this is not it. I don't mind tourists, but I do want to visit places where you can actually feel some charm.

I personally don't think that Hua Hin owns any charm. Probably the only highlight of Hua Hin was the people I met there.

Search for hotels/resorts in Hua Hin:

Join in and write your own page! It's easy to do. How? Simply click here to return to About Thailand.