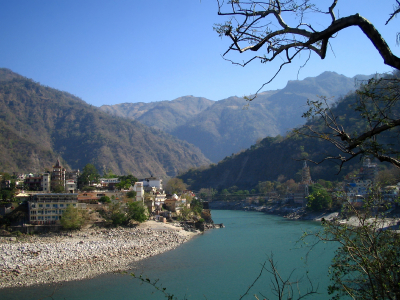 The holy land in India, also known as the Yoga capital of the world, is one of the most popular places to visit for backpackers from across the globe.

The Holy river Ganges or Ganga flows through the city, thereby adding a sense of peace and calmness to the whole atmosphere. It is popularly known for its Ashrams and spiritual Gurus who help people learn the art of yoga and meditation.

The city of Rishikesh is not too big and not very commercialized as well when compared to other cities like New Delhi or Mumbai. Rishikesh is full of Hindu temples and no non-veg food is served anywhere. In fact no alcohol is allowed in the town. And if found in possession of alcohol, there can be legal consequences as consumption of alcohol and non-veg food is against the Hindu religion and rituals in a Holy city.

However the city still boosts some very good, tasty, delicious and pocket friendly food. As the place is full of international backpackers and to cater their needs, the city serves continental food from across the world.

The best treat is to go for an American breakfast in the morning with some milk, toast and beans or maybe have a Russian breakfast with Muesli and curd (which is btw delicious. One bowl can get you going throughout the day).

For lunch you should try out one of the many river side restaurants which serve Italian/Israeli/Thai or Chinese food. The pastas are great, the pizzas even better(you can't compare them to dominoes or the actual pizzas but they are still good enough for such a small town).

As for the evening you have to try the local teas which are actually all herbal teas and are available at almost every small tea stall (and they are very cheap as well).

One place I would surely recommend is "The Office" which is a local tea and snacks shop near Ram Jhula which serves some amazing Samosas (stuffed with chocolate, bananas/apple) which tastes like a local pie but even more delicious!

Once your full with all the eating then the next stop has to be "Parmarth Niketan Ashram", which is one of the most popular Ashrams of Rishikesh, known for its yoga classes and an evening prayer which is the most soothing and beautiful thing in Rishikesh. And one must NOT miss the chance to see it (it usually begins at 6 pm in the evening).

Here are a bit of places that you would want to see in Rishikesh:

Ram Jhula and Laxman Jhula -- These are actually two bridges that help you cross the river and get to the other side, but have a long story to them according to the Hindu religion.

Goa Beach -- A beautiful place just to simply relax on the river side and soak up some sun. The place is surrounded by silver sand thereby getting the name of a beach to it.

Neelkanth Mandir (temple) -- It is a popular temple which is around 24 km from the Laxman Jhula in Rishikesh, and people can take up a shared jeep ride to reach the site.

The best part being it would cost a mere 30Rs/person which is like only close to a dollar. On your way back, the best option would be to trek back as there as a beautiful trekking route set up for people to come back (it would take at least 3-4 hours to trek back and reach Rishikesh).

Beatles Ashram -- This Ashram has got its name from the Famous Rock Band "The Beatles" who had visited this ashram and also written songs about the place.

Shivpuri -- A place around 20 km from Rishikesh, particularly known for its adventure sports like river rafting, paragliding, camping & trekking.

How to reach Rishikesh?

Rishikesh is accessible by road from New Delhi (a drive for about 6-7 hours 250 km).

One can hire a taxi from Delhi and go to Rishikesh, or else backpackers can opt to take the state tourism buses which are available every half an hour from Delhi bus station(ISBT) and the cost of a ticket is just 250Rs (approx 5-7$)

Rishikesh being in a hilly terrain, there are no direct flights or trains going there.

Join in and write your own page! It's easy to do. How? Simply click here to return to About India.