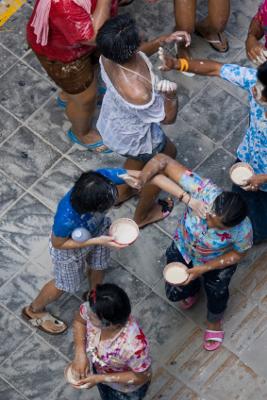 Heard about the Songkran festival in Thailand? Songkran is about New Year celebration, not only in Thailand, but also Cambodia, Laos and Myanmar.

It's more like a water festival where you'll be soaked in water and/or throw water at others. Water fights and parties are the central elements. Locals and foreigners are running around armed with buckets filled with water, water guns and pumps, throwing water at each other.

Songkran is also a time to pay respect to the elders and receive blessings from them for the New Year.

We attended the Songkran in Thailand and Cambodia in 2010. The New Year starts with processions or parades, included in Banglamphu - the backpacker area in Bangkok. The parade we saw was in Soi Rambuttri, where many guesthouses and restaurants are located.

In Cambodia, they had games in Pub street where both locals and foreigners were dancing. The music started around 06.00-07.00 pm, and very few locals started to dance.

After an hour, more and more people came to join them. They had chair games, pull-rope-games, dancing games and so much more. It was awesome to witness this special event!

At first, we sat at one of the restaurants and just watched the whole thing. Me and my boyfriend decided to join the dancing, and some locals taught us the 'hand'-move which Apsara dancers are famous for! :-)

It didn't go well with me, but my boyfriend managed to pull the hand moves :P There are a lot of foreigners celebrating with the Khmers, so don't be shy to join them! ;-)

This was a great evening and we had so much fun :-))) It was THE highlight in Siem Reap (and of course, the Angkor temples was also a highlight).

PS: You should book accommodation and transportation in advance! Locals will be traveling on the road to celebrate Songkran with their family, so buses will be filled up a couple of days before and after the festival.

Search for hotels in Thailand:

Join in and write your own page! It's easy to do. How? Simply click here to return to Festivals and Events .