Getting to Siem Reap
Cambodia 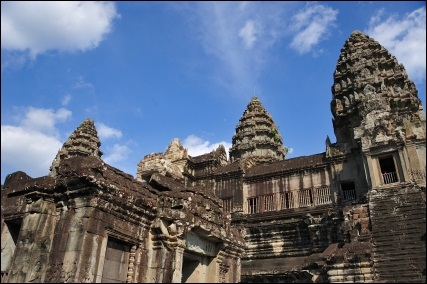 "Siem Reap Cambodia" was last updated on Jan 04, 2014
All information below is subject to change

One of the main reasons backpackers visit Siem Reap is the Angkor Temples, which Siem Reap is known worldwide for!

Even if the town is really touristy, there are still some charming spots in Siem Reap!

I didn't find the place chaotic as Phnom Penh, so mostly relaxing and calm (apart from the main road where Tuk-Tuk drivers will try to get a ride in a quite persistent way). And because of its small size, it's easy to get around and you won't feel lost like you do in the big cities ;-)

How to get to
Siem Reap

There's an airport in Siem Reap which caters domestic and international flights. The airport is located 7,5 km from downtown Siem Reap. Outside the arrival terminal, there are taxi booths where you can pay for a taxi. A car cost about $7-8 and riding on a motorcycle to town cost $2-3 per person.

Many hotels and some guesthouses in Siem Reap offer free pick-up, but you have to notify them in advance.

From Bangkok by overland:

Read my article on border crossings in Southeast Asia. (opens in a new window)

There are several private buses from Bangkok to Siem Reap, but there have been reports on scams, so I wouldn't recommend them. I would rather take the train from Bangkok to Aranyaprathet, and border a minivan or a songthaew to Siem Reap after you've crossed the border. 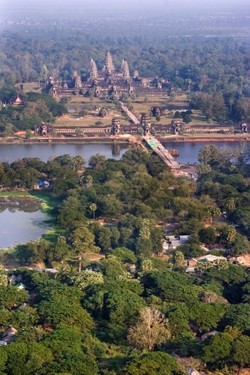 You can get to Siem Reap by bus from all major towns and cities in Cambodia. It takes 6-7 hours by air-con bus from Phnom Penh, and 10 hours from Sihanoukville. You can also choose to get a minivan from Phnom Penh ($10 per person).

We used the company Virak Buntham the whole time we were traveling in Cambodia in April 2010, and were satisfied! When we arrived in Siem Reap from Sihanoukville, the bus drove into some kind of private area at the bus station. Instead of getting "attacked" by persistent Tuk-Tuk drivers, they had their "own" Tuk-Tuk drivers.

Through Virak Buntham, we paid $1 for transport from the bus station to Siem Reap downtown.

From Phnom Penh and Battambang, there are ferries going to Siem Reap, and they arrive at the village Chong Khneas in Tonle Sap lake near Phnom Krom, which is about 12 km south of Siem Reap. A ride into town by mototaxis cost about $2.

Some important places to know about:

Don't know how to set up an itinerary for Cambodia and Southeast Asia?