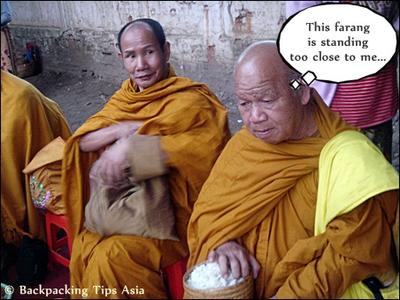 What four etiquette sins are the most committed ones?

Every now and then, I see long-term backpackers who forget to take off their shoes before entering a temple or wearing almost nothing in backpacker areas. If you're new to travel in Asia, OK, the whole culture-thing is new to you and this justifies your slight ignorance towards the culture.

Even then, you should read up on social customs before you leave for Asia. Every country is different, and there are also regional varieties. Some traditions are more intense in rural areas compared to the cities.

How would you feel if tourists visiting your home country didn't follow the social codes for your country? Pretty offended right? ;-)

By following the etiquette for that particular country, your culture adaption signalizes respect towards the locals. It means that you respect their culture.

1. Take off your shoes, dear

Taking off your sandals or shoes before you enter a home is a must in large parts of Asia. It does not only apply to private homes, but also temples and religious sites, internet cafes and some shops and restaurants in Southeast Asia.

Why take off your shoes?

If you take a look around in the streets of Southeast Asia, you won't need to think twice to figure out why.

Why drag in the dirt, the urine and the poo?

I'm kind of surprised that the same doesn't apply religiously in Europe. If someone tried to drag in dirt from the streets into my home, I would have been so disgusted. Taking off your shoes is also a sign of respect towards the house owner.

If you see shoes parked outside a building or a house, it's a hint that you should also take off yours too. If there aren't any shoes outside, take them off anyway.

This has one disadvantage. Someone might steal them. That someone took my sandals while I was eating my Pad Thai at a restaurant in Koh Tao. Fortunately, they weren't expensive, so I replaced them easily. This has only happened me only once though.

So, don't wear expensive sandals or if you have to, bring a plastic bag for your shoes and put them in the bag every time you need to go inside.

In Southeast Asia, it's common to eat rice-based meals with your hand. And preferably your right hand. The left hand is used for personal hygiene and therefore it's not considered OK to eat with your left hand.

In Vietnam, chopsticks are commonly used for noodle soups and in Thailand, you eat with a fork and a spoon. The spoon should be in your right hand (replacing the knife) and the fork in your left hand. The spoon is the only utensil that goes into your mouth. The fork is only a helper, to push food onto the spoon.

I'm shocked every time I see backpackers in their undies standing in the reception or at a cafe or a restaurant. One horror example was in Siem Reap at the Blue Pumpkin Bakery.

Right in front of me was a backpacker wearing just her bra and her fisherman pants. Good lord.

Is there anything that would justify this?

OK, she was pulling the hippie style, but come on, some decency at restaurants is actually required. Siem Reap is not exactly a beach destination in Thailand or Goa where it's more acceptable to wear less clothes. Even then, you wear a sarong or something to wrap your feminine figure.

Thai people bathing and playing in the water with their clothes on. This should say something about how important it is to dress modestly.

Another horror example is the backpacker bars in Kuala Lumpur, where traveling girls wear the skimpiest skirts. The clothes are so skimpy that you can look straight into their ass cracks when they bend over to pick up their drinks or when they sit down. I get so embarrassed on the behalf of decent backpackers.

You can still look sexy without offending anyone! And yes, you can be proud of your body, but there are limits dear. Cultural limits.

Showing anger or raising your voice is a sign of losing face. This will only cause embarrassed locals. Once in a while, you might end up in a disagreement. Either you don't feel it's fair that the tuk-tuk driver is trying to scam you or you feel the seller at the local market is charging too much for an item.

Whatever the reason, keep your head or walk away.

It's easier than said. I'm pretty impatient and lost my head a couple of times in Cambodia and Malaysia. Witnessing other backpackers getting angry makes me realize that this part of the social culture in Southeast Asia is just …. difficult to fulfill. It doesn't matter how long you have backpacked. You either have to be an Asian, very patient or a yoga guru or something to avoid this.

I've seen backpackers at the market in Bangkok getting pissed off at the seller who doesn't want to settle for the price given, or drunk travelers shouting at the bar staff.

Either way, no one's perfect. Newbie or veteran backpacker doesn't matter. We all make cultural mistakes. We just need to learn from them.

Join in and write your own page! It's easy to do. How? Simply click here to return to Getting Started Backpacking.