"Your Insider Guide to Bangkok - the Capital of Thailand" 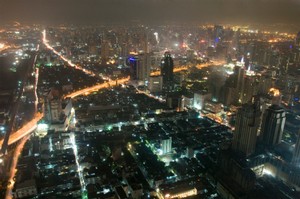 "Backpacking Thailand Bangkok" was last updated on Jan 11, 2013
All information below is subject to change

How to get to Bangkok

Transportation from Bangkok to other cities/towns in Thailand

Are you going to Thailand?

- Then I guess your first big stop in Thailand is Bangkok! ;-)

Bangkok is the gateway city for many travelers going backpacking in Southeast Asia, and it's the city that never sleeps!

Many backpackers spend their time in the Banglamphu area, so that's the reason you're going to read a lot about Khao San Road (KSR) and Soi Rambutri (SR) in this article (I'll be using these abbreviations).

Well, for starters I love Bangkok.

There's something about it that I can't explain.

The city is lively and chaotic at the same time. I'm used to big cities, so I actually find it safe and relaxing walking down the streets of Banglamphu and Siam Square.

But you might not feel the same way. So in my opinion, it's a city you'll either love or hate!

On a side note, things to watch out for in the big cities like Bangkok:

What's a Tuk-Tuk? Imagine a small carriage attached to a motorcycle. It's the public transport you'll find in Thailand, Laos and Cambodia.

How to get
to Bangkok

Your cheapest option: Public Bus (BMTA) from the airport

These are the routes I know about:

What about the Airport Express bus to Bangkok downtown?

Prior to June 2011 there were airport express buses to downtown Bangkok, included Khao san road (150 B one-way).

Take the train from Suvarnabhumi airport 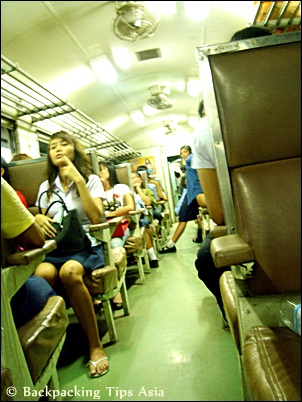 If you're a solo traveler and can't afford a taxi, try the Airport Rail Link.

When arriving at Makkasan station, jump on bus no. 556 (35B) and get off at the stop after Democracy Monument.

Take a taxi from the airport

Taxis are affordable and can be cheap if you're traveling with others and can split the cost.

The last time I took a taxi from Suvarnabhumi (Oct 2007), the touts wanted 700 B. We got so scammed...! So ignore the persistent touts at the arrival gate - keep walking!

If you take the metered taxis, you don't need to pay more than 400-500 B (per ride). But expect to pay 50 B surcharge because the taxis have to pass the tollway.

It's also possible to take a minivan from Khao san road/Soi Rambuttri to the airport (150B). Just go to one of the travel agencies in the backpacker areas, and ask for transport to the airport. It's common routine to pick you up from your guesthouse which is included in the ticket price.

From Bangkok to Other Towns
and Cities in Thailand

From Bangkok to Northern/Northeastern Thailand:

When we took this type of bus from Bangkok to Chiang Mai, it took 10 hours and the ride itself was effortless. I had leg room, and arrived in one piece.

I couldn't ask for more!

Otherwise you can choose to take a long-distance bus from the Mo Chit Bus Terminal, near Chatuchak Market. Either take the skytrain to Mo Chit, or take a bus #512 from Democracy Monument. At Mo Chit Bus Terminal, you can take buses to Chiang Khong (if crossing the border to Huay Xai in Laos), Ubon Ratchathani, Udon Thani, Sukhotai, Mae Sot, Mae Hong Son etc.

From Bangkok to Southern Thailand:

From Bangkok to Eastern Thailand (if you're heading for Cambodia):

You should calculate more than enough with time to get to the bus terminals in Bangkok. Remember that there's traffic chaos almost every hour of the day in Bangkok.

Example: if your bus departs at 19.00 in the evening, grab a taxi/bus 2-3 hours before. If you need to kill time, grab some food near the terminal.

Important places to know about Bangkok:

Having trouble on where to travel in Thailand? How to set up an itinerary?

Solve your Thailand itinerary with Map Your Adventure: Thailand, one of our most popular tutorials. 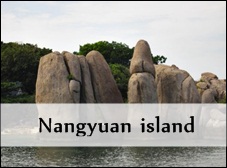 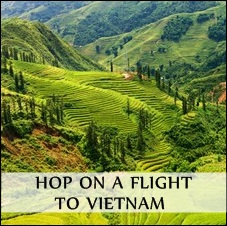 On HostelBookers.com you can find heaps of cheap hotels in Bangkok and other cities in Asia

Learn Thai on your iPod