Reviews of
Hoi An Restaurants 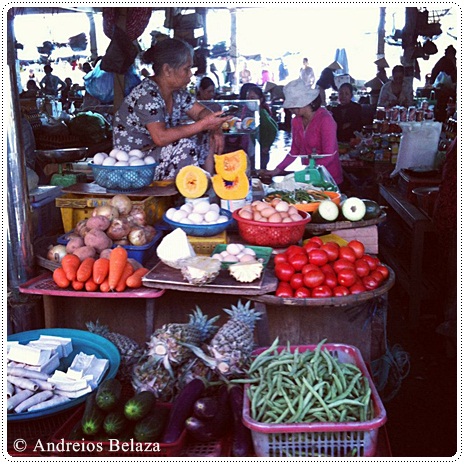 "Hoi An Restaurants" was last updated on June 17, 2012
All information below is subject to change

Street food in Hoi An

Other pictures of Vietnamese food

So, you're looking for good restaurants in Hoi An?

My cousin spent 2 months in Hoi An and he got to sample delicious Vietnamese food.

As a popular tourist town, Hoi An hosts dozens of restaurants that usually serve Vietnamese and Western. The best part must be the food stalls and food vendors scattered around town.

Many restaurants are located on the riverfront next to the bridge and in Old Town, and everything is within walking distance. Most of his time in Hoi An, my cousin only ate local food.

While you're in Hoi An, you'll notice that there are two bridges - one 'straight' bridge leading to Can Nam island, and one which is more curved which leads to restaurants on Nguyen Phuc Cu street.

All of the information below is based on my cousin's reviews. Here are the restaurants he tried :-)

At Vietnamese restaurants, most people use chop sticks. I personally think that the food 'tastes better' with chop sticks. But if this is not for you, you can always ask for a fork and a spoon.

After dinner, you're normally served tea - this isn't necessarily something you have to order. It automatically comes after dinner. 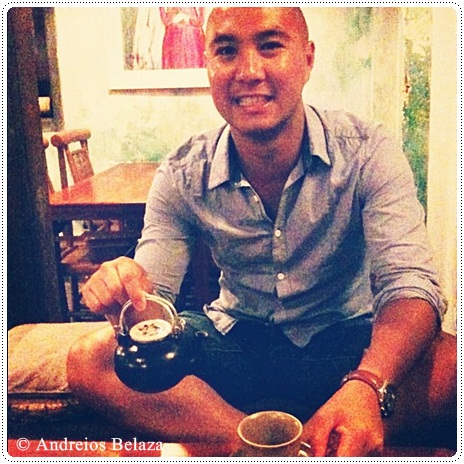 Heard about the Vietnamese drip coffee? This coffee is sweeter than you would normally be accustomed to, because it's often mixed with condensed milk. The coffee beans are nothing like the ones in Europe or North America.

At lunch time, we would drink drip coffee with some ice cubes and condensed milk - it's almost like an ice coffee - yummy! 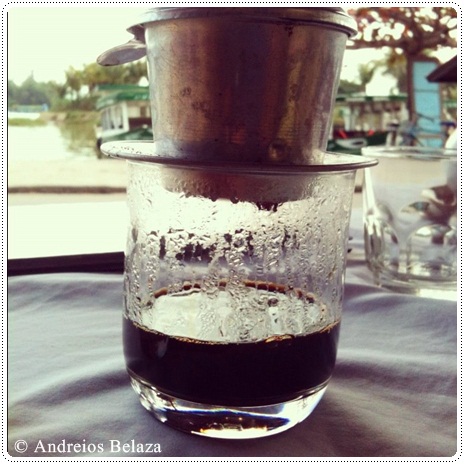 The service at the restaurants

Almost every time we ordered food, the food arrived in time (say, 15-25 minutes). Compared to for instance India, this is luxury speed! Not many waiters speak English, but they do the best they can. Maybe we were lucky, but I felt that the restaurant staff in Hoi An was mostly smiling and attentive.

Get to know locals...

...and maybe you get invited to their home. 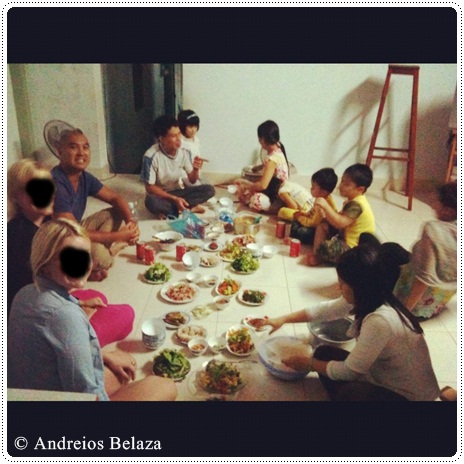 I was lucky when I got the opportunity to eat with a local family in Hoi An. My Vietnamese friend got to know some tailors, which invited us home. At their place, we were fed authentic Vietnamese food.

Here it's common to eat while you're sitting on the floor. I also had a couple of drinks with the men - local rice wine hehehe. But the women didn't drink at all.

Street Food in Hoi An 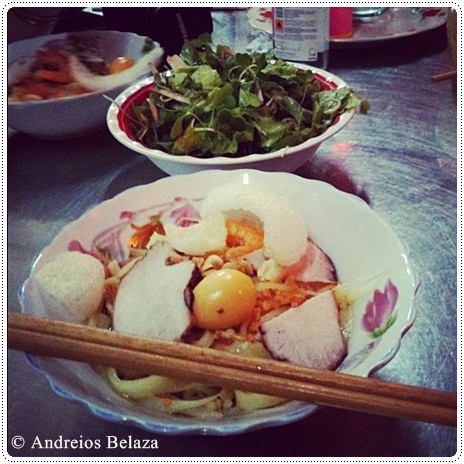 If there's one thing you have to try while traveling in Vietnam, it has to be the street food. When you're eating at food stalls there's always fish sauce and chili ready on the table.

After that came the herbs like mint, coriander and lots of chilli.

Another dish we tried at the food stalls was Cau Lao (25,000 dong), which is a must-have dish in Hoi An. Everyone eats Cau Lao in Hoi An! It's basically noodles with cracklings and pork. What so good about this dish is the meat stock which gives it a delicious taste. 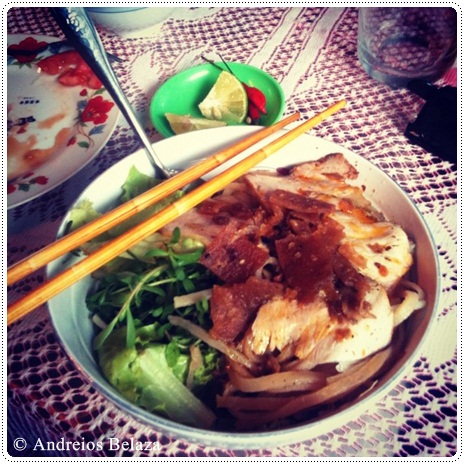 Get your baguettes at
Banh Mi Phuong 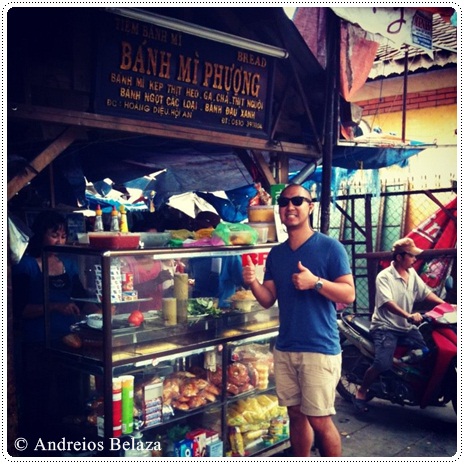 Hoi An restaurants: Me at Banh Mi Phuong

I went to Banh Mi Phuong almost every day in Hoi An, at lunch time around 11.30. Why?

Baguettes with pork pate are the best!

The secret behind these baguettes was the sauce, which the lady behind the counter wouldn't say more about ;-) Another thing I liked about this place, was the way they heated the baguettes.

They heated up the bread and served it warm and crispy! 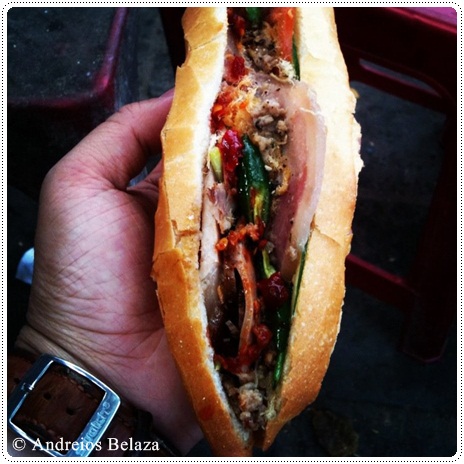 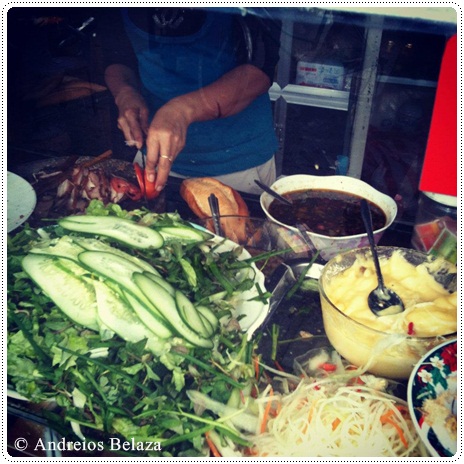 Banh Mi Phuong is very popular and there's always a long queue in the morning and around noon. The baguettes (40,000 dong) may be sold out by the time you're there around noon, but fear not. If you can manage to wait a couple of hours, they will make more ;-)

Café 43 is a family-owned restaurant, and of course it has earned its place in Lonely Planet guide books. I tried many dishes here which tasted fresh.

My favorite dish here was the mango papaya salad with enormous shrimp chips. I just had to order this dish almost every time I was there. 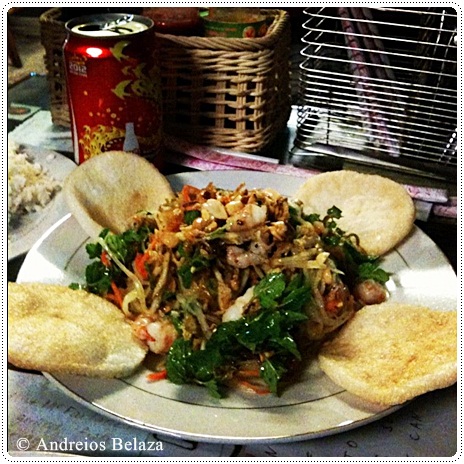 And before I forget, their avocado shakes are awesome!

They add some crushed ice and it's so good to drink it when it's steaming hot outside. This drink kind of reminds of the 'halo'halo'-drink in the Philippines. Not many places in Hoi An serve avocado shakes, so that was also a good reason for coming to Café 43.

Since most of the customers coming to Café 43 are foreigners, the prices are also adjusted accordingly. We paid like 200,000 dong (dishes for two men - that's a lot of food!) included beer. Many dishes cost less than 50,000 dong, which is fairly reasonable.

This place serves only Vietnamese food at reasonable prices. Here I tried the fried won ton, which was good, and drank local beer for 4,000 dong!

Sleepy Gecko
in Hoi An

So, what is this BBQ food about? I'm talking about BBQ pike, shrimp chips and home made potato salad, just to mention a couple of things.

Sleepy Gecko is located on the other side of the river, on Can Nam Island. The times we were there, we were almost alone, which was really nice. Just imagine sitting right on the river, eating BBQ and listening to music - it's idyllic and the perfect place to have a drink and relax.

Here you can eat as much as you like for 80,000 dong. I tried the Hoi An pancake/crepe (ban xeo). You wrap salad, scrambled eggs with shrimps in a rice paper.

Then dip it in the sauce - it's like eating taco. There's so much flavor!!! To die for! 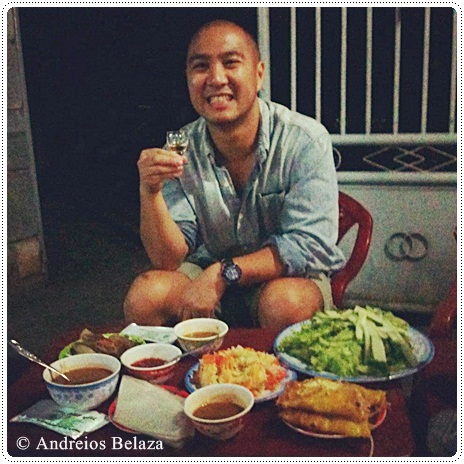 Rice wine was also included in the price. The weird thing is that there's no menu at Bale Well - they just serve you the food. BBQ is also available.

Al Frescos in Hoi An 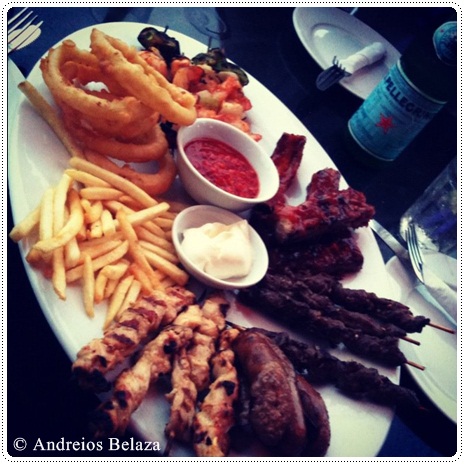 If you're up for decent Western food, come to Al Frescos!

They serve real pizzas with a juicy bottom (try for instance; Biff Extreme), pasta dishes (the carbonara is excellent), burgers with fries. The prices here are a lot more reasonable than at Manga Rooms. A pizza starts from 180,000 dong.

This restaurant is owned by some Australians. Service is good, and we received our food after 15 minutes.

This is my favorite dessert place!!!

You get delicious desserts at 50,000 dong, for instance the Passion Choco and the Almond cake. I always ended the eating session with a mint tea, which was refreshing. All of this cost me 100,000 dong. They also serve creme brulé and a range of cakes!

Vietnam was a French colony, so in a way, the Vietnamese have inherited some fine pastry techniques. At Cargo Club, the pastries are exquisite!

Other Pictures of
Vietnamese Food 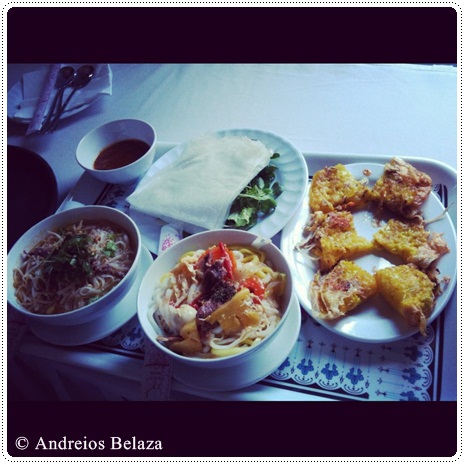 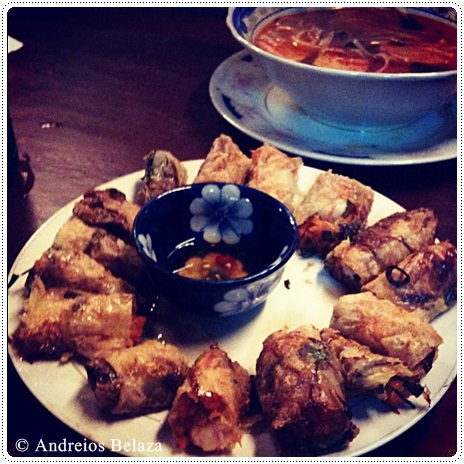 Return to top of Hoi An Restaurants 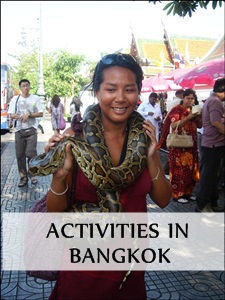