Food of India -
Reviews of restaurants
in Varkala India

"Food of India Varkala" was last updated on Jan 07, 2014
All information below is subject to change

Looking for a restaurant in Varkala?

You won't have a problem finding a restaurant in Varkala. But if you're looking for budget restaurants though, they're the minority.

If you take a closer look, there are a few stalls serving cheap Indian dishes (dosas and meals) for less than Rs 100.

Otherwise, the prices for main dishes tend to surpass Rs 100.

Most restaurants along North Cliff serve the same thing: sea food dishes. Many of them state that the sea food is fresh. Along with that you'll find plenty of eateries serving Italian and Mexican. But only a handful (not even that) are good.

Don't be surprised when you find out that the beer you ordered is being poured into a tea pot, or wrapped in a newspaper. For instance at Cafe Del Mar, you'll be given a tea/coffee cup to drink your beer from.

Me and my former class mates from development studies stayed in Varkala for one weekend. Then I returned at the end of the field trip and enjoyed the place with a friend of mine, for 5 days.

Here are the restaurants we tried!

The food at the majority of the restaurants in Varkala aren't cheap. But there are a few gems in Varkala. Sreepadman is one of them and is highly popular with locals.

Here you can get Keralite main dishes, most of them starting from Rs 40. If you want lunch, you get really cheap meals (thalis) for Rs 35. We tried the meal, and it was very good! :-) Would happily return to this place. 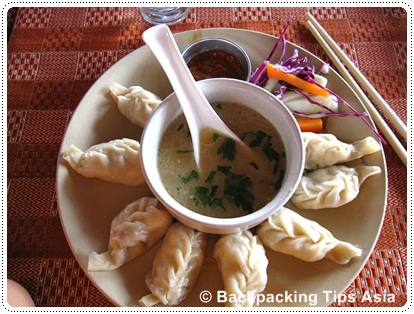 This restaurant serves Tibetan and western dishes. I tried the momo dumplings, and I absolutely enjoyed them. The momos I chose were spicy, and very delicious.

Of course, we tried some western dishes since most of us were temporarily tired of Indian food. The hummus and hamburger were alright.

Nothing to brag about. I would rather eat western dishes at Cafe Del Mar.

We ate here several times, and the service was good each time. It takes time to get the food, but that's quite normal for restaurants in India. We waited at least 30 minutes before the food was on our table.

A highlight is the fantastic view of Varkala Beach. There are several tables where you can overlook the ocean. This place was almost full every time we ate there (for lunch).

It was very convenient to eat there since it's located five meters from the top of the main stairway, leading from the beach.

Tucked away in the jungle, Juice Shack is renowned for its fresh juices and healthy smoothies.

The owner was very nice and attentive. He made us the healthy smoothies we ordered in a heart beat. The detox smoothie I tried was fresh and delicious. I have had bad experiences with detox smoothies since the taste is obnoxious, but I decided to try another round.

And the result...their smoothies were more than satisfying! :-)

We came here twice, but only ate there the first time. We were hungry this day, so we ordered the Mexican wraps (Rs 130) and a toast baguette. The food was OK. But if I'm returning to Juice Shack, I would do that for the smoothies and not the food!

If you're looking for a little nightlife, Rick 'n' Roll Cafe is a good choice!

This bar/restaurant is where many backpackers hang out. They've laid out pillows on the floor, so you can sit in a hippie way (there are tables there too).

The highlight must be in the evening where the bar fills up and people chat and drink bottles of Kingfisher (Rs 100). A nice place to visit after you've had your dinner somewhere else!

If there's one place in Varkala that can really make dishes, it has to be Cafe Del Mar.

They serve Indian, Italian and Mexican food. EVERY dish we tried there was good!

Yes, it's pricey to eat here, but I promise you, it's worth every rupee.

We basically ate here for dinner and breakfast almost every day. It was that good! There were all sorts of travelers eating here, both backpackers and tourists.

For breakfast it was crepe apple cinnamon (Rs 80) which was my favorite and fruit salad (Rs 60).

The Pad Thai was good, but not traditional. When you've tasted the pad thais in the streets of Bangkok, there's hardly anything that can beat that :-S

My friend tried one of their sea food dishes, but to her it was nothing special. The fish was dry.

When I asked if she would remember the dish in the future, she was like:"Nope."

We joined some backpackers from Shiva Garden who ate Indian dishes. And from the sound of it, they couldn't stop eating. So, Indian food is better at Clafouti!

Return to top of Food of India

Lake Side Restaurant
in Varkala

Food of India Varkala: Veg pakora at Lake Side restaurant

If you're only walking from Varkala Beach to Odayam Beach, then I bet you're going to pass Lake Side restaurant. There are very few restaurants on the way, so this place is quite full during the day.

I'm a sucker for veg pakora (Rs 70) and ordered that with a glass of lassi. Good pakoras and nice lassi.

Where: on your way to Odayam beach

These prices are only estimates. For instance; price for water and cigarettes vary from shop to shop.

Looking for a guesthouse or resort in Varkala?

Return to top of Food of India