What's so special about the food on Si Phan Don?

Since Si Phan Don is located right on the Mekong River, its largest food resource is of course fish!

One of the meals that characterize Si Phan Don is the steamed fish packed in banana leaves, called "Mok Pa." Throw in some sticky rice as well - and there you have a lovely and SIMPLE meal!

What does the island of Don Det got to offer?

There are loads of riverside restaurants on Don Det. The restaurants are owned by local families and they serve local food and Western meals, like pizzas, burgers, pancakes or fruit salads. And also excellent Chinese food, like noodle dishes.

But I got to warn you: If you're craving for some real Western food, you can't expect that kind of food quality on a dusty, small island like Don Det!

At Jasmine Restaurant, you'll get cheap Indian food and Beer Lao. It's a very popular restaurant, so be early if you want to eat here.

I ordered the masala, and it was alright. I can't remember the taste or the food experience that much, so I guess I've tasted better Indian food than theirs.

What I do remember is that a big, brown, fat grasshopper jumped on my head while I was eating my dinner with some backpackers from Quebec, and they were like:

I was shocked, so I couldn't scream. I just waited for it to jump onwards. But then it jumped into my masala food. Great.

Well, you can't exactly expect anything else when you're eating out in the open, now can you?

The Bakery on Don Det

The taste of pumpkin and a lot of onion will blow you away. I don't even like onion, but it was actually OK this time.

Another must-try: Banana and chocolate pancakes! (with some mint tea)

Or you can just grab some fresh bread, focaccia and doughnuts - now that's hard to get in Laos!

The Bakery is run by an Australian guy - bread bless him!

It's on your way to the French Railway, and it should be on your right hand (if coming from the north side).

And if you're lucky, you get to lay down in one of their hammocks.

I noticed that they had a "Happy" Menu, like the ones I saw in Vang Vieng. The word "Happy" should ring some bells!

Take a look in their menu and read that they blend valium and paracetamol in the food.

You can also get "Happy Birthday Cake" or "Happy Wedding Cake," and they were of course selling joints. I didn't try anything of this, if someone is wondering.

Smoking weed on this island is not unusual. So, blending marijuana into the food/drinks is not actually surprising. I smelled pot wherever I went! But the Valium and paracetamol part was just weird...!

Where to have a drink on
Don Det Island

You can get drinks and beers at most restaurants on the island!

The closest thing you can get to action is at the Don Det beach, by the boat landing. Backpackers will usually gather up, bring beers and some music (a guitar). It's a good way of getting to know other travelers, so it's definitely worth a shot.

Price for Lao Beer is less than $1 on Don Det island.

Looking for a bungalow in Don Det island?

Read reviews of guesthouses and bungalows
in Don Det at TripAdvisor

Return to top of Laos Food 2 in Don Det 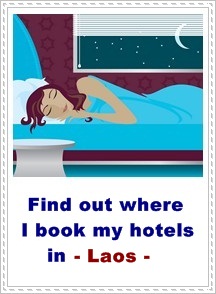 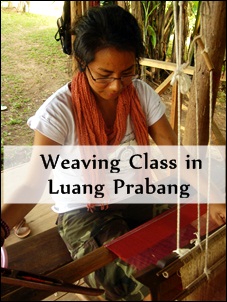