December Festivals and
Events in Asia

Christmas and New Year's Eve are just around the corner!

Even there are mostly Buddhists living in large parts of East and Southeast Asia, there are large concentrations of Christians living in for instance Vietnam and the Philippines.

Either way, hotels and restaurants know the importance of Christmas and New Year's Eve for foreign tourists, and that's why you're going to stumble upon firework parties here and there ;-) 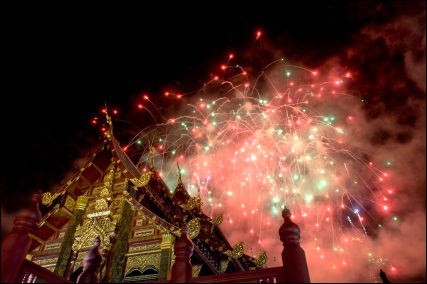 New Year is coming up and in Thailand there's always a New Year's party going on! In Chiang Mai, there will be a countdown festival with concerts, cultural and music performances, firework displays and of course the final countdown to 2014! :-)

Where: Thapae road and Thapae gate

In Phuket, the countdown to 2014 will be held at Phromthep cape followed by fireworks show at Chai Field on December 31st.

If you're staying in Bangkok, head for Ratchaprasong for the countdown festival at Central World. Local artists will perform on stage and of course, the fireworks display.

If you're on Koh Pha Ngan, don't forget the Full Moon Party held on December 31st! ;-)

From experience, I celebrated New Year's Eve in Koh Phi Phi which was amazing. We started the evening with a lovely fish dinner, continued the celebration to Rolling Stoned Bar and ended up by the ocean with drinks at Sunflower bar :-)

Ayutthaya is on the World Heritage List and the merit is celebrated yearly with music and cultural performances, singing contests, beauty "pageants", light show and much more.

Looking for a guesthouse or hotel in Thailand?

New Year's Eve is celebrated in all major tourist destinations in Southeast Asia.

Interested in technical design? Then I believe this festival is for you! The best Korean and European creations are displayed, and the best young designer is recognized.

Return to top of December festivals